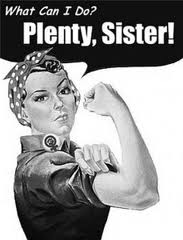 In 1953 MGM made a movie called Battle Circus starring Humphrey Bogart and June Allyson with Keenan Wynn, all big stars back then.

I’m looking at an advertisement in Time Magazine. There’s a picture of Bogart kissing Allison and she says, “Say you love me….say it at least once.” Bogart, clutching her throat, says with their lips pressed together, “I don’t like to talk about it. I like action”. (Excuse me for gagging.)

Was that the way men were supposed to treat women in the 50’s? That was normal love communication in the 50’s huh?

The banner of the ad reads, “Nobody treats them rougher than HUMPHREY BOGART.” Oh really, are you supposed to treat women rough? Bogart was always the tough guy macho male. Think of all the males that were brought up under this influence and still carry that chauvinistic banner.

Next the ad says, “So it’s sizzling action with a sizzling dame….JUNE ALLYSON” Dame? You can’t do that today. Sinatra in his early career called
them ‘dames’ and ‘broads.’ Looking back from this vantage point in history, rather derogatory.

Women got the right to vote in 1920 and men were reluctant to make concessions to women because a lot of them felt they should be kept in their place. In the home, or secretaries, teachers, or nurses. Today women are 50% of the work force.

You want to see how things have changed in 60 years and who’s going to be running the world soon? In a book called The End of Men….The Rise of
Women by Hanna Rosin, men are no longer the dominant sex. Men are falling off the cliff. Men are losing out to women economically because women have better skills and do better in school. Women are more flexible. Women are heads of households and many make more money than men. Women have been underdogs for too long. (See movie “Battle Circus”) Rosin says when manufacturing jobs disappeared it took a toll on men.

Is this bad? I think women are about to take their rightful place in history. It’s only a matter of time that business, politics, and religion will be taken over by women.