We Were Buddies Right From the Start

7 years ago, May 14, 2007, Uriah “Rockin’ Ray” Gooding died.  We were buddies right from the start.  We had a lot in common.  We were both born in the 30’s, we’re short, we had a crazy sense of humor and gave a lot of credit to our mothers for our motivation…and we each had 3 great children.

We both joined WBT in 1971.  Ray stepped into a very white conservative culture at Jefferson Pilot, but he fit like a glove. The real connect was radio…..we loved the business.  He worked at WGIV and spun tales of Genial Gene Potts, the morning man who rhymed almost everything he said. I got to know Chattie Hattie because of Ray. She was the first Black female DJ in Charlotte.  In 1971 radio was just coming of age in Charlotte and Ray taught us the hip side of soul music and WBT got in the contemporary groove. People didn’t know how to spell ‘FM’ in 1971. In the 80’s Ray did the popular oldies show, Sunday Night Hall of Fame on WBT.

Ray was a trail blazer.   He knew radio wouldn’t take care of him the rest of his life so he invested in real estate rental properties and had a sizeable portfolio. But he didn’t ‘wear it’. In his 30’s, while at WBT, he went to night school to get his college degree.

Ray introduced me to the Black community for which I am ever grateful.  Some of the stops included the House of Prayer Cafeteria and the history of Sweet Daddy Grace,  John McDonald’s Restaurant which was a hangout for politicians and we hob knobbed in Ray’s drinking days at Jimmy McKee’s Excelsior Club on Beatties Ford Road.  Ray gave up the sauce not long after that. And I almost forgot, Johnson C. Smith University.

While at WBT Ray developed a big weekend mobile disco business that I worked in part time.  Kool and The Gang, “Celebration”….’music’ is our middle name and Ray knew all the star soul brothers.

Ray put his heart in the community and made the charity Penny Pitch on WBT a big success.  He led the station as Public Affairs Director in raising tens of thousands of dollars for children’s charities throughout Mecklenburg.  The coveted “Leadership Charlotte” award was given to him one year.

To sum it up, Rockin’ Ray worked his butt off, was a good friend to many, and will be remembered, fondly, on this day he went to heaven….May 14, 2007. 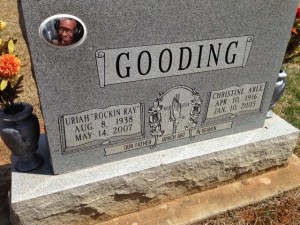