Ty Boyd is not a person but a state of mind…

40 years ago in 1975, I took over Ty Boyd’s morning show on WBT and he went into motivational speaking full time. At the time, the all night DJ was Truckin’ Tom Miller, who played country music, and ended his show at 6am when I arrived. Sometimes, he would hang around and we would kibitz for a half hour. Truckin’ Tom was a character!

His friends would drop off a pint of booze with the night watchman and he would deliver it to Tom. By the time I arrived, Tom was full of himself and feeling no pain. He had an incredible poetry talent. He could write a humorous poem in 5 minutes. He played the character of Professor Tillman Le Dino…a name that came from a fertilizer manufacturer. Get it? A good ole Southern Mississippi man from Mississippi Southern University.

Here’s what he said about Ty Boyd. Not only is Ty Boyd a well known after dinner speaker, but is also the most cheerful man in America. As you can see the Professor doesn’t like cheerful people. 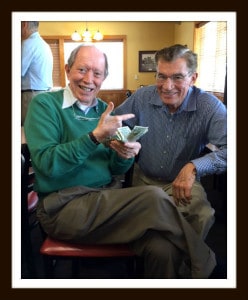 Ty Boyd is not a person but a state of mind
Like dinner for two with an exquisite wine.

He bubbles and sparkles your spirits to renew
Like some vino blanc or burgundy brew.

Some question his purpose, his mind, and intent,
They don’t understand a man who on cheer is bent.

So join me in toasting what’s long overdue,
The milk of kindness like some refreshing dew.

May it engulf and surround the terrible void,
Of those who never met our own Ty Boyd.

To some, what I’ve said may seem utter folly,
But I’ve managed to finish without one gosh, gee or golly.

Which has to be some small accomplishment,
Like finishing last in a beauty pageant.

Ty, a salute straight from the SOUTH,
And if you say “Fantastic!”

I will hit you in the mouth!