The Importance of Talking to People Old Farts and New Memories 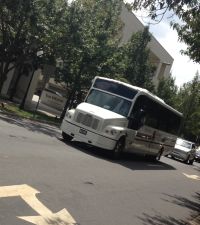 The DNC is over, except for the stragglers finishing up and going back to the airport. We did it.
We justify the pain and agony because it’s good business, good money. We doubled our staff of drivers beginning many months ago. When using affiliates, the driver & car permitting process in Charlotte is lengthy and filled with regulations that caused unlimited bottlenecks. The prep time for this was months.
Starting last weekend, the phones and the reservations were rolling in ready to be assigned. When new chauffeurs come to town, you have to train them quickly with tours, maps, regulations, etc. They don’t have the street knowledge and sometimes get lost.
The Rose staff was slam to the wall once the bell rang. 12-16 hour days. Andy slept on the floor of his office one night—for 4 hours.
We normally do 110-120 rides a day at Rose. For the DNC, it ballooned to an average of 260+ for 5 days, peaking at 299 on Wednesday. We ran close to 160 vehicles. Our staff missed meals and sleep to get the job accomplished, and worked many hours of overtime. Two of our staff spent the whole week coordinating rides from a University City hotel and the Epicenter.
The DNC takes almost all our attention and there’s not much “smile” left for our regular customers, so you really have to fake it.
We had one small fender bender, not our fault. We had many drivers from affiliates in other states to staff up our needs and the biggest impression we made on them was our dispatch office that is staffed 24 hours a day to lend advice, direction, or help when needed—which was often. Only a small percentage of transportation companies are staffed 24 hours.
If you were here in Charlotte or saw us on TV, downtown looked like a police state. The flow of movement was… difficult. Delays, missed directions, are all a part of it.
I’ve officially been out of the driver’s seat for 10 years, but for one day during the DNC I sat down in one of our Town Cars and did the honors. The first trip was a pick-up in Rock Hill, to take a passenger to the airport. It was a 7:15 am pick-up. On the way down I-77 at 485 in the northbound lane was a stalled tractor trailer blocking one lane. Traffic backed up about 3 to 4 miles. And I had to come back that way to the airport. So I figured out an alternative route… 21 to Carowinds Blvd… to 49… to Tyvola Road… and the traffic on that was a mess, too. I had arrived 17 minutes early that morning… 6:58. He was in the car at 6:59. He stepped out of the car at 7:59. One hour, when it normally takes 25-30 minutes.
Next ride that day was to pick up a congressman who had been sitting with Michelle Obama the previous night (I spotted him on TV). My instructions said to pick him up at the NASCAR Museum on Brevard Street. I arrived at 10:20 for a 10:30 pick-up. I talked my way past a couple of cops to wait at the curb by the security fence. Police and federal security guards were all over the place. I felt like someone was watching me… and they were. I hoped they didn’t think my cell phone on my slim body was a gun.
Sirens go by once in a while. One cop said, “Michelle is coming by in a caravan. Stand on the sidewalk side of the car.” Yes sir. I waited till 10:45… no passenger. I called… someone… where is he? They called back. He’s waiting at the Westin. I thought… who screwed that up? It will take me 15 minutes to loop around and get into the Westin. Sure enough, slow go. I got to the Westin… at 11:10… and it wasn’t one congressman, but he and three aides. They piled into the car and I headed up College Street. We have to go through the bomb check tent. Dogs sniff us… cops open the hood… they open the trunk… “Okay, move on.”
We arrive at East Meck High School where the congressman is handing out autographed copies of his book. I sit in the car and wait for them to finish. When they and all the school entourage came out, I jumped out of the car and opened the doors. One of the school administrators came over and said, “H.A., I didn’t know you were driving.” I said, “Yes, I am… and I even take out the trash.”
I journeyed my guests back to the Westin. Mission accomplished.
I hope I don’t have to drive for another five years.