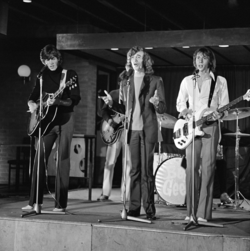 I went to see the Charlotte Symphony Friday night featuring a Bee Gees tribute band from Toronto Canada. I’ve been a long time fan of the Bee Gees since WBT’s heyday. I saw a Bee Gees tribute band in Vegas a year ago and they were a hit, so I thought I’d get a ticket and take in the show. Ovens Auditorium was about 80% full of mostly the over 50 crowd… and some a bunch more than that.

The Bee Gees were at their peak in 1978 when the movie “Saturday Night Fever” came out. Disco was fun. The show was one of the best I’ve seen in my 45 years in Charlotte. They did all the Bee Gees hits and made the house rock, and their falsetto voices were dead on.

Some of the seniors were cookin’! The aisles were packed with dancers. It was almost a hootenanny: ‘Staying Alive’, ‘Jive Talkin’, ‘You Should Be Dancing’. People almost rocked the seats loose from their moorings.

Barry Gibb is the only Bee Gee still living. Boy, they left a legacy. Oh and P.S. the Charlotte Symphony is a marvelous institution in this city.