Politicking Harder than the Governor Where Were You on May 8, 68 Years Ago? 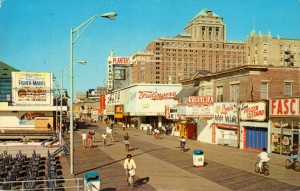 As a New Jersey native,  I used to be proud of many of their landmarks.

They need to pull the plug on the historical Atlantic City.  It is done…..overcooked …..and dried up.

Sixty years ago it was considered one of the most popular vacation destinations in the country. In fact, it was called the “Playground of America”. For years the Miss America Pageant anchored an exciting week in that city. The Boardwalk was the most famous in the USA and it housed many big stars. It had many similarities to the one and only Las Vegas.

I recall when they fired the old war horse host, Bert Parks. They replaced him with young emcees with the hopes of making it bigger and better.  When that didn’t happen, they brought Uncle Bert back.  At this point, times had changed, and Burt Parks bombed. The issue was not the emcee, but the beauty pageant itself. It’s over, dead and almost gone. They are trying to resurrect an old lady with too much makeup. Most young women wouldn’t get in a beauty pageant if they were beautiful. It really was a demeaning voyeurism for men who ran this country 50 years ago. We’ve outgrown that stuff and the perception of the beauty pageant has tarnished over the years as equality in women has evolved.

Atlantic City always had the most famous Boardwalk in the world. I remember when I was a kid how impressed I used to be. Unfortunately, today it’s gone to pot. It’s overrun with drunks, pan handlers and dirty pedicab operators who want to pedal you up and down the row of ugly shops selling T-shirts, tattoos, pizza, psychic mind readers, etc.

Atlantic City used to be the only East Coast toilet to flush your money. Now casinos have popped up everywhere so the seniors have a lot of choices on ways to blow their children’s inheritance.

Need more proof? According to Bus & Motorcoach News, traffic to Atlantic City has been on the decline for more than a decade. In February, 140,000 people traveled on casino buses; thirty percent fewer than the same month last year and about half the number riding two years ago.

In the Broadway show “Bells Are Ringing”, there’s a song that’s appropriate now….’The Party’s Over’….(It’s time to call it a day).

Will the last person to leave Atlantic City please turn out the lights.