How Could You Not be Successful With a Smile Like That?

I’ve been in Charlotte 46 years.  I’ve seen a lot of entrepreneurs come and go in that time.  I ran into an old friend again from back in my radio days. 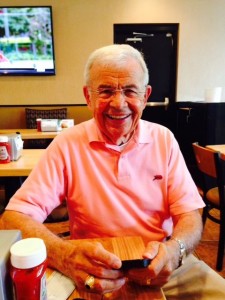 How could you not be successful with that smile?  We had another conversation at his restaurant on Arrowood Road.  He graduated from East Meck High in 1958……maybe I shouldn’t tell that.   He didn’t tell me….I saw it on the wall at the school a couple years ago.

He went on to Duke U. and developed a hero.  Colonel Harland Sanders, KFC.   George started out with a Mr. C’s chicken restaurant in 1967.  He thought the Colonel’s chicken was the best and he was going to duplicate it.   The process of evolution birthed ‘Showmar’s’ in 1982 and today he owns 29 of them.

I bragged on them and many other good Greek restaurants in Charlotte and he said….”And then our kids don’t want to take them over.” I said, “of course not.  They don’t want to work 15 hours a day like you did for 50 years.”  He laughed.  You know where the Showmars named came from?   ‘Showmar’ was the name of his bookkeeper.  He added an ‘s’ to it and paid her a monthly royalty until she died.

People like George Couchell are innovators and create products that help build and make our city what it is.  It’s sure been fun knowing people like “Mr; C.”