We Were Buddies Right From the Start Mt. Rushmore of Golf

About 35 years ago the Charlotte Observer sponsored a very popular event called the “Beaus Arts Ball”.  Like the name says, it was an artsy party that ran for quite a few years. This was a dress up party in the New Orleans Mardi Gras league. It was held at the Park Center. People would compete for prizes and it was like they let the creative artists out of jail. Lucille Thompson was one of them. She dressed me up and I went along for the ride. One year we won first prize for ‘Beethoven’s Fifth’ and our picture in the Observer.

Another time we were inspired by Reaganomics. Cutting the budget: 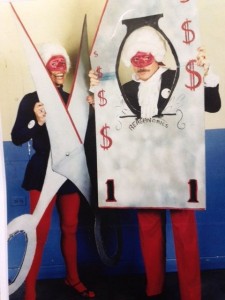 Oh, and that Beethoven’s Fifth costume? 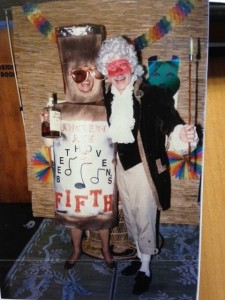 And you thought it was music.