I love golf when I connect and do it right and the ball goes where I’m aiming. Nothing feels so good. But there’s a lot of pain between those kinds of shots. I love to watch golf, especially the drama in the majors. 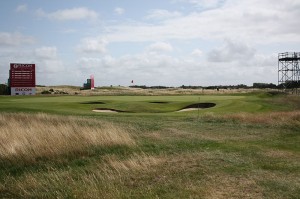 During the British Open recently, we get to see where the game was born, in Scotland. Scots invented the game of golf. The reason the game is 18 holes, so the story goes, a fifth of Scotch has 18 shots so they had no choice but to quit at 18. The Royal & Ancient have to drink to keep warm. They said the crowd was down because it was too WARM? It was only in the 70’s and 60 something the last day. They should play in our heat.

Maybe the R&A drink when they play because the scenery is so bad. Despite the heritage I think the golf courses across the pond need a face lift. I know links courses are different, but they lack the natural beauty of  ‘green’. Most of the course doesn’t look like fairway. It looks more like a cow pasture. A few camera angles from the blimp made it look like a bombing run in WWII.

A golf course is supposed to have trees. I love the noise it makes when my ball hits one. The squirrels come out of there fast. Muirfield doesn’t have any squirrels or gophers. Remember the movie ‘Caddy Shack’? It wouldn’t have been the same flick if they shot it at Muirfield. Golf courses are supposed to have flowers too. Remember Bill Murray’s scene in the movie? How about water holes? How can you not have water or streams on a golf course? The sound of the ball plopping to a watery grave and the profanity that follows. I’m sorry, but when we broke away from the British we improved on the golf courses. Trees, flowers, bushes, and lakes are much prettier and make better hazards than hay and sand bunkers where it takes two or three shots to get out. You could put a tarp over those bunkers and live in them. Augusta National is the most beautiful golf course on the planet. Thank you Bobby Jones. You’re my hero.

2 Responses to Another Weekend Hacker