The Highlight of My Broadcasting Career

Forty-one years ago, I was hired to DJ the midday show on WBT. I had been working at a station across town and this was a big step up. WBT, the second commercial station in the USA, had always had a national reputation. I did my daily radio show there, mostly music and telephones, and became the “survey” king on radio–made it a fun thing. They called me the Midday Marauder. Soon I was MC’ing beauty pageants and other events around the region, and soon got into public speaking. I  became a commercial voice for sponsors on and off the station. Ad agencies hired me. I worked 6 days a week and for many years I did the 10 am to 3 pm shift. I loved the business. (Editor’s note: He’s too humble to say it himself, but HA was one of America’s most popular radio hosts. In 1977 he was the #1 midday host in the country.)

WBT went through changes and I survived all of them except the last one in 1990 when the station went all news. Fortunately, I had been planning my exit for a few years, having started a transportation company with a few limos parked in our driveway. That company eventually grew into Rose Chauffeured Transportation.

Broadcasting is fun if you’re a people oriented person.  I left my mark at WBT, as did many others in their journey through life.  Over the course of its first 90 years, the station has honored 8 radio notables in the WBT Hall of Fame: Ty Boyd, Loonis McGlohan, Grady Cole, Arthur Smith, Charles Crutchfield, The Briarhoppers, and Earl Gluck. Last Wednesday, March 28, 2012, in conjunction with the 90th anniversary of WBT signing on the air in 1922, they added my name to that illustrious list. 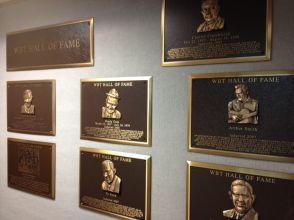 About a hundred people showed up in person for the ceremony, which was also broadcast live on the John Hancock show. Live attendees included TV’s 90-year-old Doug Mayes and NC Fiddler Dwight Moody. Together we’re the “Ancient Mariners”: 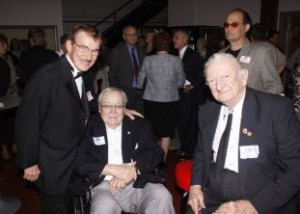 Mike Collins of Charlotte Talks fame and Chatty Hattie, the first black radio host in Charlotte, were there as well: 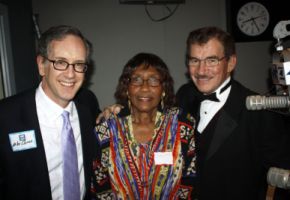 You can listen to the ceremony on WBT’s site at http://www.wbt.com/hancock/index.aspx. Scroll down a bit and you’ll see my picture right above the audio for the ceremony.

After the ceremony, they let me have the microphone again for an interview on the John Hancock radio show. You can listen to my baloney here:  http://content.wbt.com/podcasts/episodes/Hancock_2012032032812213633.mp3 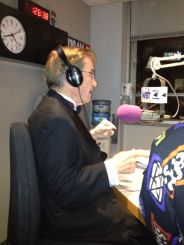 The station took video of the ceremony and I’ll make sure you can watch that too. It was the highlight of my broadcasting career to receive this honor and endorsement of the many friends that shared in the event.

One Response to The Highlight of My Broadcasting Career