Radio When It Was Fun A Memorable First Ride

Bill Bean is a newcomer to our group. He’s a retired Charlotte dentist and brother to the late 1950’s WBTV anchorman, Bob Bean. Dentists are like barbers, they can talk.

Super seniors have a lot in common. Most are half deaf. The four of us all wear hearing aids and we all talk at the same time. Very little listening gets done. That’s where the expression came from, and especially in our business….’We like to hear ourselves talk’. The four of us have celebrated 333 birthdays. If you lined us up at Thanksgiving and only saw our necks, you would think we were turkeys.

We picked Doug Mayes up at his house on the Lake, told a few jokes and watched the fabulous Bob Hope-James Cagney dance routine they did at the Friars Club about 1952. Doug started at WBT in 1952, Ty in 1961, and HA in 1971. Doug lived outside of Nashville before he came to Charlotte. He used to tune Eddie Arnold’s guitar for him.

When we got to the restaurant there’s always a little commotion over Doug and Ty. I was standing back to one side and one senior citizen and her husband were observing and she said…”Who’s that?” And her husband said, “It sounds like they used to be somebody.”
Join us next month for another episode of “The Golden Boys”. 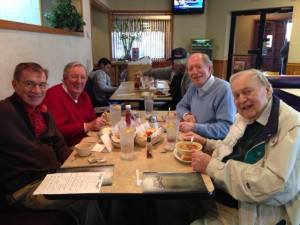