The Taxi Driver Festival in the Park 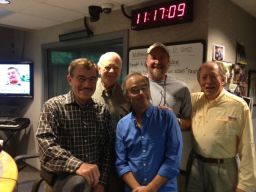 Jefferson Pilot owned WBT-WBTV for about 50 years. A lot of broadcasters went through the place over the years. Every once in a while we old farts connect for lunch and reminisce.

The scene of the crime recently was Stacey’s Restaurant in Denver, NC. About 16 of us broke bread, told stories, and acted like politicians—you shake everybody’s hand and when it’s time to go, somebody has to push you out of the place.

We went up in a chauffeured SUV. Ty Boyd met me at the Rose office and we went and picked up Robert D. Raiford of the famed John Boy and Billy Show. We had to get a tour of the place and get our picture taken with the two stars. I could tell by their look when we walked in… They were thinking… “Who are these old geezers?”

This is Robert D. Raiford. He’ll be 85 in December. He’s been in business more than 60 years and does commentary on JB & B every morning on the Fox. Notice his 1950 Underwood typewriter. He refuses to modernize. He types everything on that antique. Raiford started his early career in the 1950’s at WBT, and basically got fired for being a rebel. He said, “Humility is not my strong suit.” He’s been at the Fox for 26 years. Before that, he changed radio stations a few more times than wives. He’s been married 4 times.

Me, Robert D., John Boy, Billy, and Ty. If the 5 of us pitchmen hadn’t come through Charlotte, the town might not be much bigger than Rock Hill. JB & B’s studio is a spooky place. They don’t do their show live except one day a week, I think. It looks like a jail cell with pictures. John Boy was wearing the same shorts and shoes he wore at JP 30 years ago. Both he and Billy were sober. They’re getting old.

Me, Robert D., and Ty. We’re all in the old man’s club. Raiford said… “I used to spill more than I drink now.” Ty took his Metamucil before lunch. Ty’s leadership speaking business is still going strong. Two of his daughters travel all over the world doing seminars. Raiford still rides around on his motorcycle and flies a small engine plane.

Ty, Raiford, Doug Mayes, and me. First let’s check the ages of these relics. I’ll say this as softly as I can. Shhhhhhh… Ty is 81, Raiford is 84, Doug is 90, and yours truly is the baby, 78. Y’all know Doug, he’s a magic story teller. Minnie Pearl, the country comedian, was a favorite of this generation. Doug said… she was held up in a dark alley one night… A robber pointed a gun at her and said, “Give me your money.” She said, “I don’t have any.” The gunman put away his gun and frisked her body all over and said, “No, you don’t have any money.” She said, “IF YOU DO THAT AGAIN, I’LL WRITE YOU A CHECK.”

All these characters had one thing in common. We loved what we did. When we were walking out of the station, Raiford said, “I never worked for a living. What I did was fun.” We all agreed. Thanks for the memories.