Here’s to The “Greatest Show on Earth”

May 21st say a prayer for the Ringling Bros. and Barnum & Bailey Circus. It closes its 146 year run on that day. The “Greatest Show on Earth” has been headed for this day since the 1950’s when the same force that killed vaudeville, television, drove the circus out of the canvas big tops into arenas.

Everything has a shelf life. The internet, cell phones, and ipads took a toll on the circus, too, as well as many other things. Kids got more pleasure out of screens than going to the show.

But the circus has some grand history! One of the founders P.T. Barnum, I have such admiration for. He was so creative. I especially love two of his favorite quotes: ”There’s a sucker born every minute” and “Give them razzamatazz and they’ll come back for more.”

I went to Madison Square Garden, in New York, to see the show in the 40’s, when I was a young kid before television existed. That show was a big deal of WOW’s. My 8 year old kid brother bought a whip at the circus. When he got home, he set stools and benches up in the yard and pretended to be a lion tamer. My mother and I watched through the windows in astonishment. Little did we know, we were watching the future. He became a professional actor.

I remember when the circus came to Charlotte back in the 70’s, WBT put on a big ticket giveaway, and arranged to have me ride an elephant in the parade of animals from the train station to the old coliseum. If somebody gives you a chance to ride an elephant, don’t do it! I had a blister the size of a 50 cent piece when I got off that pachyderm. 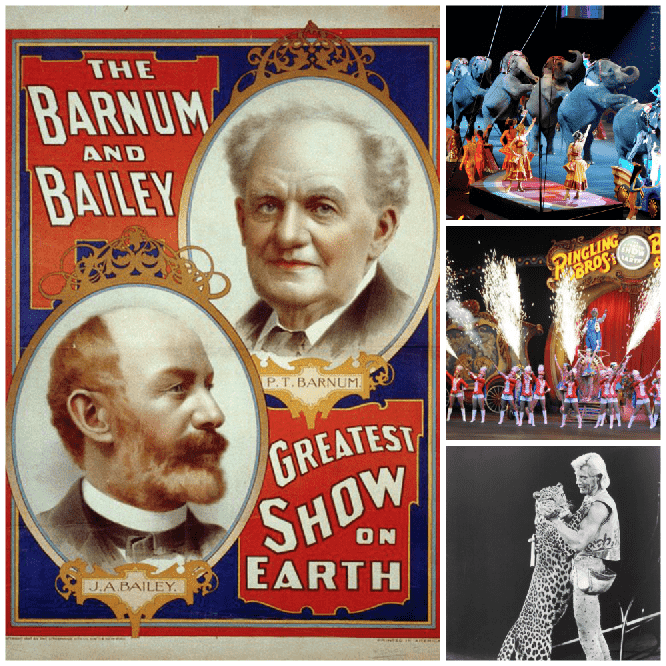