Sunday was a banner day in Charlotte at the Panthers Stadium. Except the banners stopped waving in the second half. I went to the game with retired Channel 9 sportscaster, Harold Johnson. A couple of ‘has beens’. From 1976 to 1979 Harold and Bob Lacey had the highest rated morning show ever on WBT. 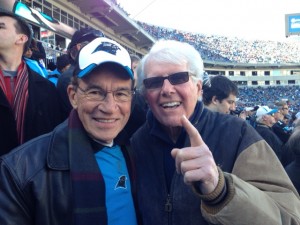 When Harold was waiting for me to arrive at the stadium, a black SUV with blue lights pulled into the entrance. The window went down and the passenger inside yelled out, “Harold, thanks for your vote.” It was Governor Pat McCrory. 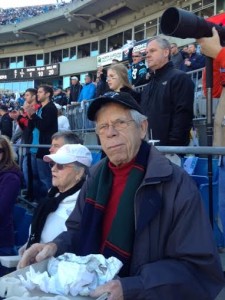 Sitting a couple rows behind us was Ron Green and his wife Beth. Ron was without a doubt the best golf sports writer that ever lived….especially when talking about the Masters and Arnold. His Thanksgiving column is legendary. 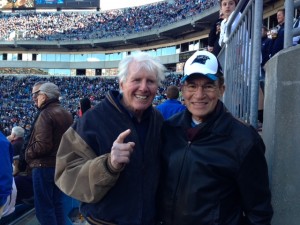 Harold Johnson looks like Santa Claus off duty. Harold wore funny looking pants. I said, “Are those seersucker pants?” And he replied, “Yes, Sears sold them and a sucker bought them.” That happens to be a bad 40-year-old Harold Johnson joke.  I remembered it and set him up intentionally. They were actually corduroy pants…..and only old men wear corduroy. He qualifies. 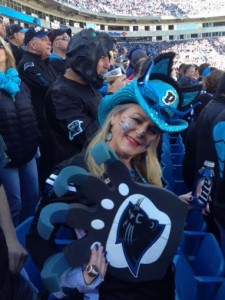 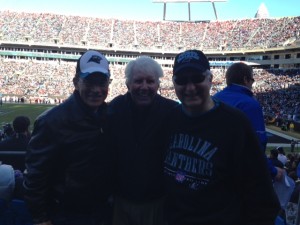 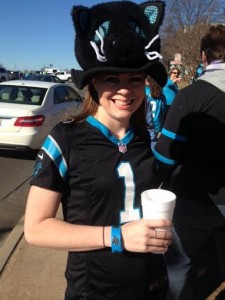 And there’s another killer Panther hat.

The people watching was better than the game. Go Panthers, next year.