Flying Solo at the Neighborhood Grill

I rarely sit at the bar in a ‘sports bar’ but I was flying solo today and needed a bite to eat and watch the Panthers so I climbed on a chair at the Dilworth Neighborhood Grill.  It’s really kind of comical.  The TV monitors have 6 or 7 games going on at the same time in the same room.   It’s like the ‘5 Hour Energy’ drink times three.  And loud.  Louder than a bunch of 10 year olds at Monkey Joe’s.  And I’m half deaf.  It’s a little bit like being locked in a small jail cell with 5 drunks.

The characters that attend these ceremonies are serious.  Panther fans of course, mixed in with Packer, Bear and Lion fans etc.   All yelling at different times.  Each dress for the occasion too.  Jet Green, Bear blue, Steeler black, Washington red.  Some like to wear an oversized team hat and tuck their ears under the crown.  When you do that you become a bonafide ‘doofus’.  People you’ve never seen before all become buddies especially if you’re rooting for the same team.  The men outnumber the women about 4 to 1.  And another statistic……they act about half their age.  Maybe high school.

I never watched TV in public before.  Some of the commercials are very personal like Cialis and Viagra.  They ran one of those and I snuck a glance at the woman sitting next to me about one third my age.  She looked at me.  I know what she was thinking.

I left at half time.  It would have been much louder and more fun had the Panthers showed up for the game. 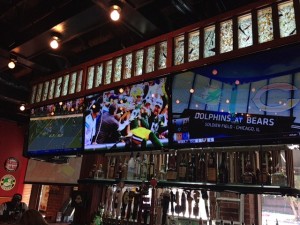