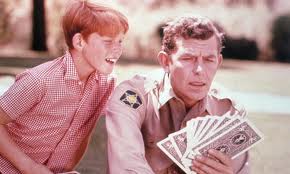 My 3 children were born during the run of the popular “Andy Griffith Show” in the 60’s. Like everybody, I loved the show. I loved the North Carolina homespun Andy, and I was still a ‘New York Yankee’, at the time. Do you think maybe he had some indirect influence on me coming to NC and living here for 44 years?

When I lived in Ft. Wayne in the early 60’s, I auditioned for Andy Griffith’s part in the civic theater production of “No Time For Sargeants.” I faked Griffith’s NC twang and it was pretty bad. Everybody is glad I didn’t get the part.

Like most people I never wavered for my admiration of Andy Griffith. In 1968 our youngest son, Andy, was born and who do you think we named him after?

I’ve been to Andy Griffith’s hometown of Mt. Airy many times. It really is about all the good things in small town life from Floyd’s Barber Shop to the Snappy Lunch pork chop sandwich. It’s just the opposite of life in the fast lane. We all want to have an Aunt Bea.

The Andy Griffith Show ran from 1960 to 1968. Our society was exploding with change in that decade. Rock ‘n roll, civil rights, the pill, divorce and the assasinations of John and Robert Kennedy and Martin Luther King. Women were moving into the workplace. Gloria Steinhem and women’s lib began their march.

Do you think part of Andy Griffith’s appeal was the warmth and peace we needed at a turbulent time?

Sheriff Taylor was a widower and depended on a perfect Aunt Bea who was not only Aunt to Opie, but his mother and grandmother too. They make it work beautifully in the script because life is rarely the way it is supposed to be. They showed us love, morality, integrity and doing what’s right. Remember the lesson Andy gave Opie for killing the bird with his slingshot?

Naïve in Mayberry was an asset. Barney Fife was so out of it he made it funny. The magic of Barney is that all of us have some Barney in us and we try hard to hide it. In Mayberry it’s okay to be naïve and if you are, more people will like you.

The Andy Griffith Show should run forever on TV because we’ve lost a lot of what they had. When we watch that show life is softer, more gentle and warm all over again. The fantasy we would all like to have.