Give It a Whirl Laurel and Hardy 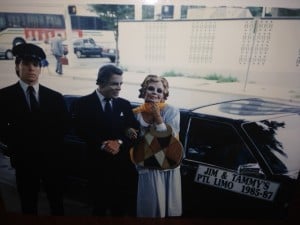 I started Rose Chauffeured Transportation as a limousine service in 1985.   Two years later, Jim Bakker’s PTL Club folded due to mail fraud.   His 1985 Cadillac limousine went back to the dealership and Rose bought it in ’87.  25 years ago, when Bakker’s trial came up on August 29, 1989 I couldn’t resist.  I got rubber face masks of Jim and Tammy from Morris’ Costume Shop and Lucille and HA put on a show.   We arrived in front of the courthouse on West Trade Street, chauffeured by son, Andy,  just as the action was beginning.  Cameras from every media attacked the moment. Our picture was in papers as far away as Chicago. 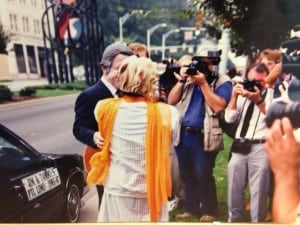 One Response to A Special 25th Anniversary